Review of The Devil’s Caress by Margie Mason 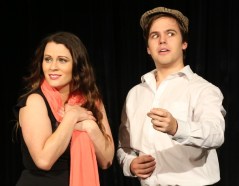 “When I interviewed the writer on Arts and Tarts, I knew that Wendy Lewis had a brilliant idea for her play … interweaving the true – life story of the novelist, June Wright, with the murder mystery set on Victoria’s upmarket ‘Peninsula’.

In 1950’s Australia, a clever woman could not work outside the home, but June Wright managed to produce six Agatha Christie – type successful books, as well as dutifully producing six children in what I imagine would be endless domestic drudgery!

It was this aspect of the play which interested me as much as the acted-out series of murders, accusations, finding-of evidence etc which were presented in an interesting visual setting.

Director Roz Riley always chooses a colour scheme – in sets costumes props and even small details – which reflects the play’s themes and milieu. Black, white-and-off-white reminded me of the literary and bookish background, while little announcements in tan … like washing on a line … came on at the back of the stage, giving clues and ‘furthering the plot’.

As I was sitting in the balcony, I occasionally missed a few words …(my fault!) so that at times I was watching a series of cleverly choreographed ‘tableaux’ … which were interesting in themselves because of the hundreds of subtle movement changes and seating arrangements of this rather large cast. In fact the deceptively simple benches – draped with variations of the colour scheme – became a coffin, a bed, and many other scene settings.

There is nothing like a good Agatha Christie type of story to take one’s mind off the everyday stresses and strains of living in Sydney. I take a smug delight in empathising with the woes of victim and perpetrator alike. And perhaps I could have been more emotionally involved, particularly in the first act, when there was a lot going on.

I loved looking at the touches of colour in belts… subliminally blood? Or just another plot development detail?

Alexandra Chambers looked and sounded like an enterprising – and well organised fifties housewife, and her colourful outfits and aprons were an appropriate contrast to the world of her characters.

Music, lighting and lots of other production details were well-thought-out and created sensuous atmospheres. If I saw it again, I’d like to be sitting closer, as there was a great deal of exposition in the well -written dialogue. Or maybe the actors could really ‘ham it up’ or be a bit more melodramatic, because I like the idea of devils doctors dalliances and dastardly deeds!”