Fun movie that captures the spirit of Eurovision. And Iceland. And has laugh out loud scenarios and hilarious lines like: ‘The elves went too far’ and ‘Should I draw attention to my groin area as well?’ as well as the killer line: ‘There are no gay people in Russia’ straight from the mouth of  Russia’s smouldering hot favourite Alexander Lemtev played by Dan Stevens.

Will Ferrell and Rachel McAdams are brilliant as odd, hearty Icelanders Lars and Sigrit. It really doesn’t matter that they are both too old to be so silly – it just adds to the wackiness. There’s a running joke that Lars is fairly sure she is not his sister…but what if Lars’ father ever married Sigrit’s mother? Ha! Lots of cameos from past Eurovision participants – although sadly, no Verka – and references galore to all things Eurovision: flares, Lordi-esque costumes, human hula hoops,  synthesisers, skin tight in-your-face costumes, detachable angel wings, wolves and the inevitable hamster wheel.

Love the beauty of Iceland, the craziness and the elves.

I’ve heard so much about this world-wide sensation…is it the most amazing musical ever? Well, not really. It’s energetic, it’s meticulously timed and directed, it’s fast-paced – sometimes too fast-paced – but I have the same problem I had with Bohemian Rhapsody. It’s so nice. Everyone is nice. There’s a bit of humorous conflict about a bus strike and a dash of racism and angry voices against an Egyptian called Ali and a woman in a hijab but other than that it’s just nice. Joyous. Exuberant. And nice.

Given the incredible subject matter, that is, what happened to the 6.5K people on flights diverted in the wake of 9/11, I was expecting emotional depth. Passion. Despair. None of that really because there’s too many people to examine their individual emotional lives in depth. What this show does do is give us glimmers of the fear, worries and heartache of the people on the plane and then zero in on two couples: a gay couple (Nicholas Brown and Doug Hansell as the two Kevins) and a Texan woman (Katrina Retallick) getting together with an Englishman (Nathan Carter). What the show does well is present us with the reality that generosity of spirit, warmth, acceptance and compassion can do extraordinary things. And that’s a great message.

The music is uncannily Irish, full of life, but I can’t remember one song. There was a pretty ballad “Me and the Sky” from Beverley (Zoe Gertz), a pilot on an American Airlines flight that fateful day…well, I don’t remember the tune but it made an impact because it was heartfelt.  When is a musical not a musical? I read this show described somewhere as a ‘song cycle’ and I think that hits the nail on the head. The music is a soundtrack to the lives and it’s all just got to keep moving.

After the exuberant opening number, within 5 minutes I was thinking this would make a great screenplay. I loved the band giving us a taste of Newfoundland shindigging at the close and I look forward to the movie…I bet there’ll be one. 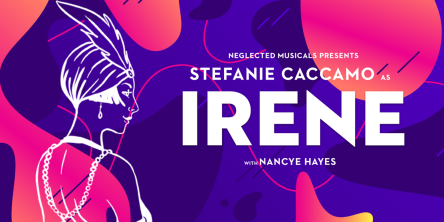 With just one day’s rehearsals, this was a knockout show. You hardly noticed those nifty little spiral bound A5 scripts. Many of the cast hardly looked at them at all – particularly star of the show Stefanie Caccamo as Irene. What a beautiful, sensitive, spot on performance as the feisty young Irishwoman who dares to dream.

I saw Irene when I was a girl and all the songs came back to me – ‘The World must be bigger than an Avenue’, ‘We’re getting away with it’, ‘I’m always Chasing Rainbows’. Wow! Music by Harry Tierney – I looked him up and must say I’m not really familiar with any of his other musicals. But Irene was and is a beauty! And, as director Shaun Rennie pointed out in his little introduction, it was the longest running Broadway musical of its time (1919). I did miss If Only He Knew that Julie Anthony sang so hauntingly in the original Oz version in 1974…

With the marvellous Nancye Hayes as Irene’s matter-of-fact mother and Mandy Bishop as a riotous Mrs Marshall, the cast shone. The girls from 9th Avenue were fab – Ashleigh Rubenach and Ayesha Madon as Irene’s pals Jane and Helen and the boys worked beautifully as an ensemble: Rob Johnson, Connor Neylon and Axel Duffy. ‘The Great Lover Tango’ with Rob Mallett as the Stuffed Shirt Donald Marshall III was hilarious and I also loved that quirky little ‘The Riviera Rage’.

See this if you can! 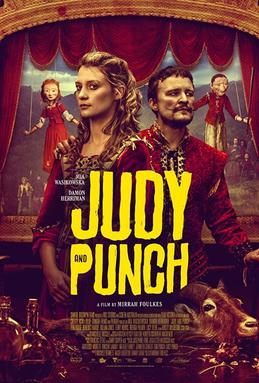 Written and directed by Mirrah Foukes

A devastating movie. Beautiful. Breathtaking cinematography. Violent. Cruel. Tense. Extraordinary. If this doesn’t win every award at the next Australian film awards there is something wrong.

Gothic, dark and menacing with a twisted fairytale quality. As well as a bit of Mad Max-type post-apocalyptic chaos and carnage.  Set in a brutal village in a brutal period of history, there’s candlelit rooms, dark laneways of cobblestones, crowds baying for blood and much nocturnal scuttling around in hooded capes. This is a dog eat dog world (or perhaps a dog eat sausage world?) where brutality reigns supreme. Stonings are entertainment. And viciously beating your wife until she’s scarcely alive is… well, ‘that’s how you do it’.  Resonating themes of violence, vengeance and choosing good  are so powerful it’s impossible to see this film without reflecting on the world today. How do we stand up to injustice? How can the unempowered gain strength? A fascinating study of forgiveness and lack of forgiveness.

The famous Punch & Judy puppetry creates a wonderful world of clever recurring imagery – the constable with his baton, Mr Frankly and his truncheon bearing hoons who are skilled at extracting confessions, the rabbits (both dead and worm-infected and cute and alive), the crocodile scene – fabulous!

Brilliant cast. Agonisingly sad when Scaramouche (Terry Norris) remains kindly and polite to the end and his poor wife Maude (Brenda Palmer) simply suffers quietly beyond all imagining. The ensemble of Forest people including the beguiling doctor (Gillian Jones) show by their resourcefulness and courage that they may be outcasts but they will remain together, co-operative, cheerful and courageous. And non-violent aside from skinning those rabbits.

Brilliant script – wry comments here and there that make you laugh out loud even if the situation is so appalling. Like the crying drunk in the lane, supposing that they need ‘to mix it up’ a bit when it comes to hangings and stonings so everyone doesn’t get bored…

Boisterous, playful and wickedly dark. An exceptional tale of how easily crowds can be manipulated, how individuals make their own choices and how much evil lurks in the human heart. As the credits run, the final footage of 1950’s school children watching Punch beat the hell out Judy and the looks of terror on their faces is especially chilling. 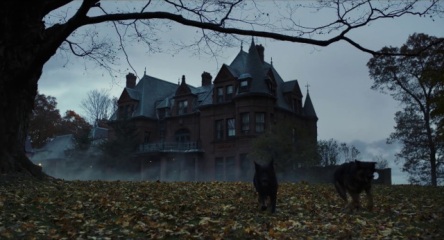 Opening shot is divine. Grand old house silhouetted against foreboding sky and in the foreground piles of crunchy autumn leaves lie looking crunchy and autumnal. Two black dogs appear in the distance and run towards camera.

Sort of goes downhill from there. Not downhill, just not particularly memorable.

Daniel Craig as Benoit Blanc had me guessing for a little while. Is that a really bad French accent? Surely not. Is he trying to be Hercules Poirot? And then it became clearer – it was a Southern US drawl. Confusing. He was softly spoken but that’s about all. He wasn’t intuitive. He wasn’t passionate. He wasn’t particularly interesting. Sadly he was a spineless anaemic character up on the big screen and Daniel didn’t really have much to play with.

Ana de Armas as Marta Cabrera plays her nursing role beautifully with wide-eyed innocence and sincerity.  A nice portrayal of a young Latino woman in a sticky situation. But could she be involved in this –? And Michael Shannon as Walt with his menacing walking cane. Could he have – ? Would he – ? And the fabulous ditsy Joni (Toni Colette)? It’s fun to guess.

Christopher Plummer gives a fine portrayal as the 85 year old patriarch, full of life, full of money and probably the only one full of good sense. The question is what will he do with all that wealth? And will his beloved family like his decision?

The sunburst of knives that figures in so many scenes is wonderful. It frames anyone who sits in front of it like an evil halo. But there’s little other imagery that stands out.

Thought it would be a lot funnier than it is. There’s a few jolly moments but not many. The murder/mystery genre has a grand history but the dialogue in this particular movie was pedestrian (“asshole, asshole, asshole”) and lacked wit. Some ruthless script editing would do wonders…it doesn’t  need to be 130 minutes long.

But at least it’s entertaining to watch a seemingly together family descend into chaos because of that bothersome old thing called greed.