Look behind the surface, honey!
– Statue to Gina in Statues of David 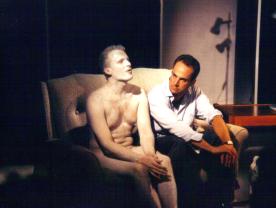 Statues of David came to life at the Sydney Fringe Festival with sell-out performances at Bondi Pavilion. The original cast was Anne Carroll as Gina, Andrew McGhie as David and Paul Sztelma as the Statue.

In his wrap-up of the Fringe, SMH’s Stephen Dunne described Statues as ‘an initially odd tale about Michelangelo’s sculpted David that delved into the fragility of relationships and the tenuousness of historicity.’  Couldn’t have said it better.

Statues went on to win Best Australian Play at Theatrefest and was short-listed for the inaugural Griffin Theatre awards.

Statues of David also played at Tap Gallery, Darlinghurst in 2003, with Madelaine James as Gina, Victor Kline as David and Ben Brock as the Statue.